A more competitive high-end machine "YD - 2 EX" is newly introduced in the YD - 2 series which brought numerous victories in drift competition! The slim main chassis is matte graphite specification, enhances the lacy impression even more, combined with the newly designed front bulkhead, draws out the traction without moderate. The setting width is expanded with the aluminum shock tower which modifies the mounting position of the upper arm and shock. It is the newest model leading the RWD drift scene to heat!

More narrowed main chassis is the mat graphite finish and raises it as racing appearance and will provide Aluminum shock tower has renewed with the increased hole for both shock and upper arm for providing more updated set up for leading competitive RWD drift scene. 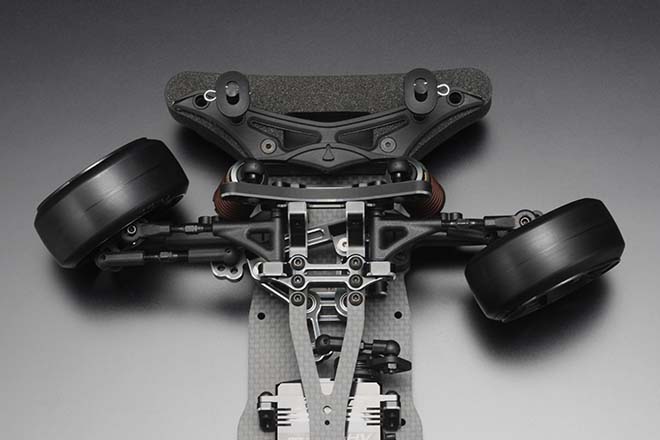 The front break angle and Ackerman ratio which is the essence of the RWD drift car. The high performance demonstrated with YD-2 brings out "front running". 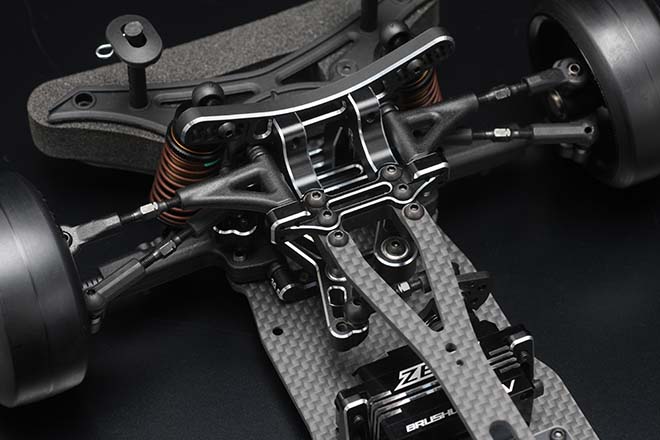 By making the surroundings of the steering wheel and the suspension mount aluminum, the improvement of the steering response and the trace performance of the front part are dramatically improved. I will tell the road surface without excessive steering control of the driver. 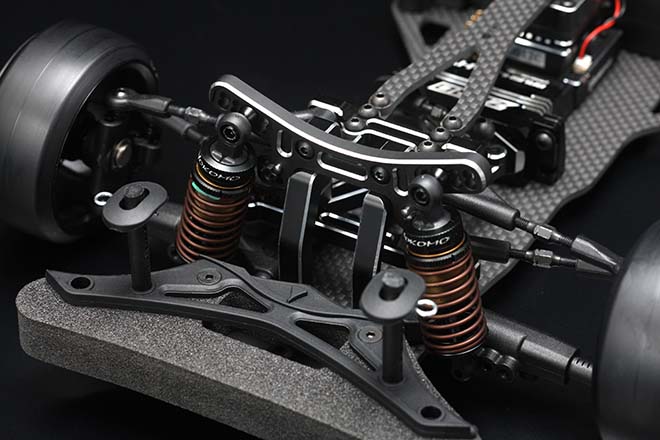 Bulk head of the front which became new design. It becomes a specification that draws out the bending of the main chassis effectively, and it gains traction efficiently. 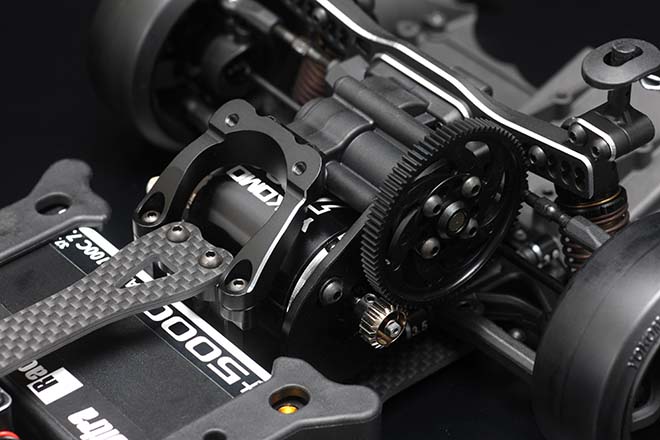 As a drift car, a 4-gear transmission of innovative design. By setting the motor horizontally, it prevents the left-right balance from collapsing due to the counter torque of the motor, and derives the neutral steering characteristic. On the other hand, since the rear traction increases with the throttle ON, it is possible to derive a sense of stability and acceleration at the time of exiting the corner. The enclosed type gearbox is also attractive for its high dust resistance.
In addition, the gear differential of rear transmission adopts a lightweight resin bevel gear to reduce weight. It contributes to improvement of throttle response and motor performance.

Meanwhile, the rear traction will be increased increased the motorcycle, by installing the motor in horizontal position and lead the neutral steering characteristics. High dust-proof sealed gearbox is also attractive.
In addition, rear transmission gear is a lightweight type by using a plastic bevel gear. Contributes to the improved throttle response and performance . 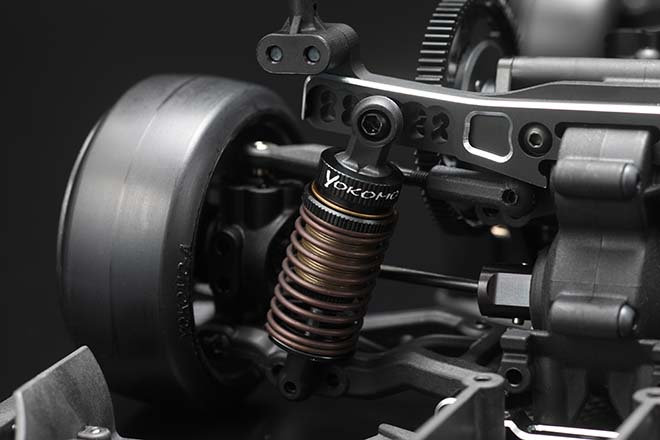 Super low friction shock which applied Kashima coat treatment to aluminum shock cylinder and reduced the frictional resistance with piston to the limit. For on-road use, we adopted a class maximum capacity 11.2 mm big bore cylinder. In the case of resin tires used in drift driving, minor vibration received from the road surface is a major factor of lowering tire grip, but it also absorbs vibrations with a super low friction shock with increased shock capacity, maximizing grip I will earn. Since it is a height adjustment type, you can change the height of the car simply by rotating the spring tensioner, and it also supports springs of various lengths. Of course, by adjusting the damping force finely by changing shock oil or piston, the optimum setting can be obtained according to various road surface and driving conditions.

The largest capacity in on-road car category, 11.2 mm big bore cylinder has adopted and enable to absorb even small vibration due to run Of course the setting that is most
suitable for every length of
springs. suitable for to get the maximum grip. Health adjust system possible to change the car height by rotate the spring tensioner and suitable for various length on springs. Suitable for various road surfaces and run situation in total is provided by the change of shock oil and the piston to get a damping force with finely adjusted. 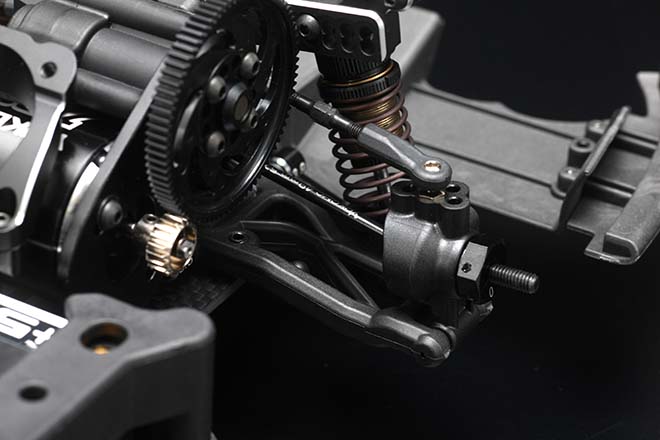 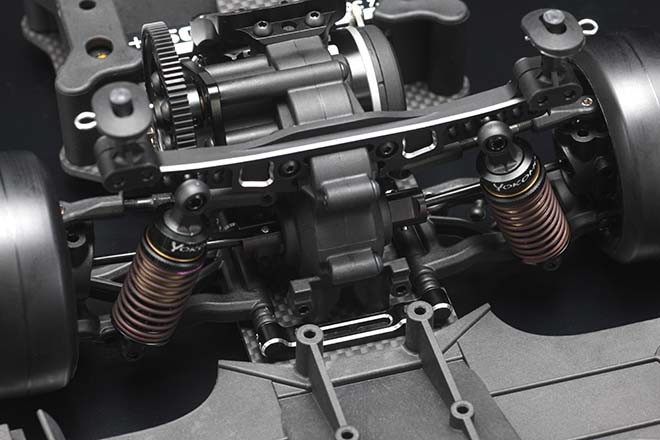 The front and rear shock stays increased the number of damper mounting holes, and the setting width expanded widely. In addition, since the mounting position of the upper arm of the rear shock stay is increasing, the setting of the roll center and camber change also becomes versatile and it is possible to correspond to various driving styles.
In addition, aluminum rear suspension mounts are set to a smaller number of toe-in according to the demands of expert drivers. While pulling smooth turnability, at the corner exit, actively push the machine forward, leading to a top speed increase.

Setting variation has greatly expanded, increasing damper mounting holes for shipping tower.Also the variety of roll center and camber settings are possible to totally increased arm hole on rear shock tower, so suits for any kind of customers driving styles .
The Aluminum Rear Suspension Mount Sets On More Toe-Less According To The Demand Of The Expert Driver. Very Smooth Turning Out For Corner Exit But Also Actively Push The Car Up To The Top Speed Range. 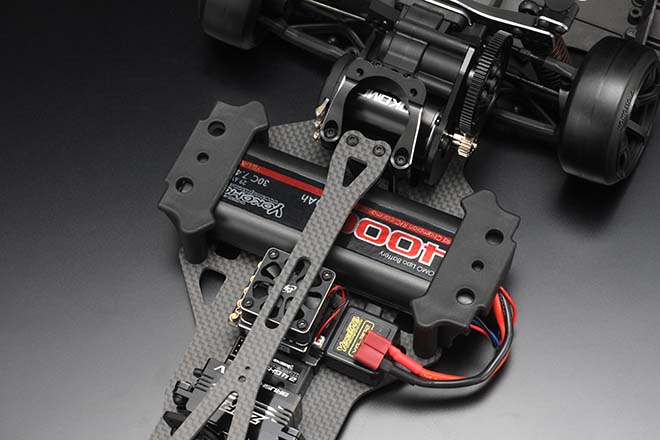 Two kinds of battery holders are attached to the YD - 2 series, and it corresponds also to the standard size pack battery from the short Li - po battery. Because the holder can be detached with one touch, battery exchange is also easy.

Also the battery holders are in the one-touch removable for ease of replacement. YD-2 series are bundled with 2 battery holder for the shorty.