This is a high spec machine YD - 2 E PLUS which incorporates practical warp optional parts in advance on YD - 2 E RWD drift standard machine. Based on the already established 4 gear transmission and the front steering system, the standard deck chassis of SLF Aluminum Big Bore shock and Matte graphite is standard equipment as standard option parts. Further details refined according to the latest drift style. The front suspension arm is a newly designed short type, even with the kit standard enough break angle can be obtained, the rear suspension arm is also equipped with a long stroke LS suspension arm as standard, and the basic performance of the machine is greatly improved. Besides, it is a recommended competition style for experts such as rear toe-in settings that make use of rear traction, and front and rear aluminum shock towers that ensure the operation of the suspension. 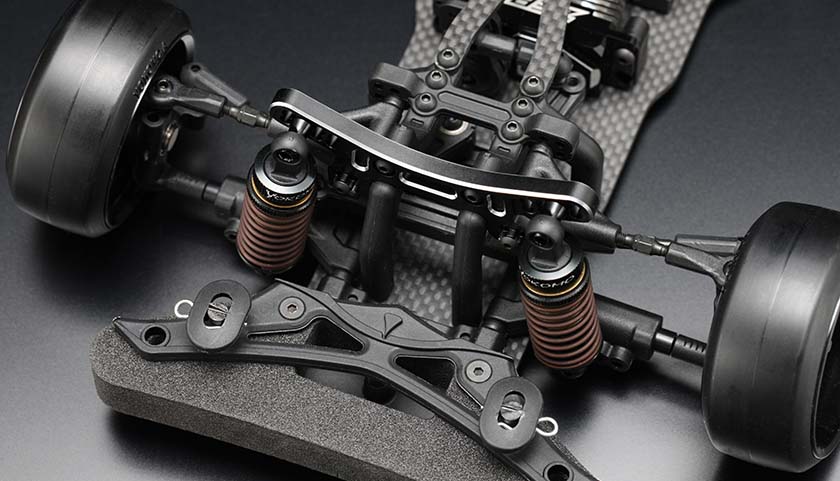 Around the front which was set wide tread with kit standard. Besides improving the sense of stability and realizing offensive running, merits such as improvement of cutting angle and expansion of alignment setting range are increasing. Aluminum shock stay is equipped as standard on the front to improve road followability. The bevel edge treatment makes sharp looks and enhances luxury. 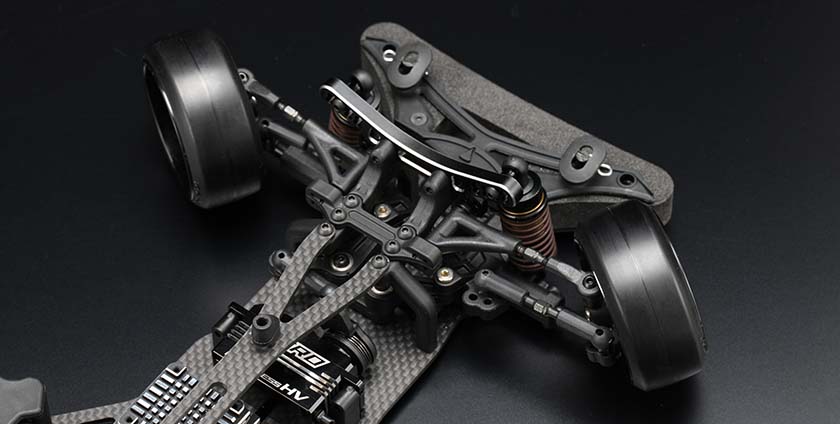 Interference between the wheel and the suspension arm and shock is reduced with the wide tread setting, and even in the condition of the element it realizes the extreme break angle. By obtaining a break angle that can be handled even when the drift angle gets deeper, the range of control widens and it is possible to produce a powerful drift. 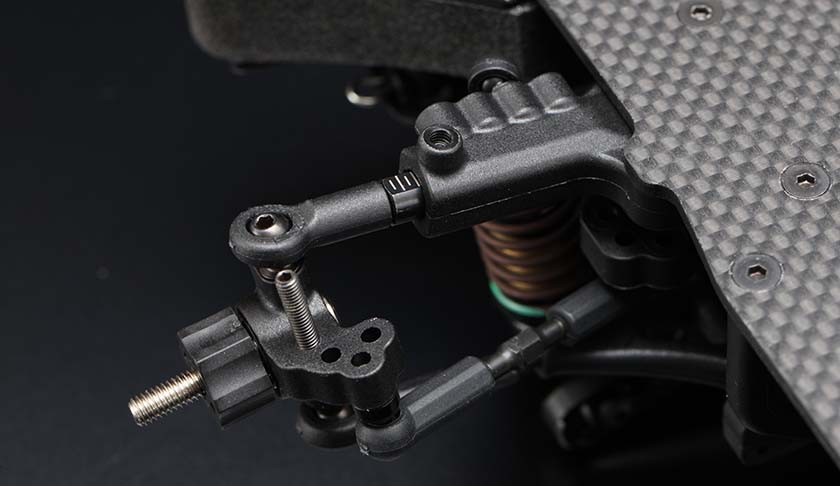 Front suspension arm is a newly designed short type. We refined the position of the steering stopper and realized the overwhelming cutting angle.

More steering angle due to new Short Suspension Arm which has redesigned for prevent from interference with wheels, besides the location of steering stopper had also refined.

The main chassis is a slim graphite made from top-down from YD-2EX which is the high-end model of the E series. By using matted high-grade material, it has become a chic image finish. 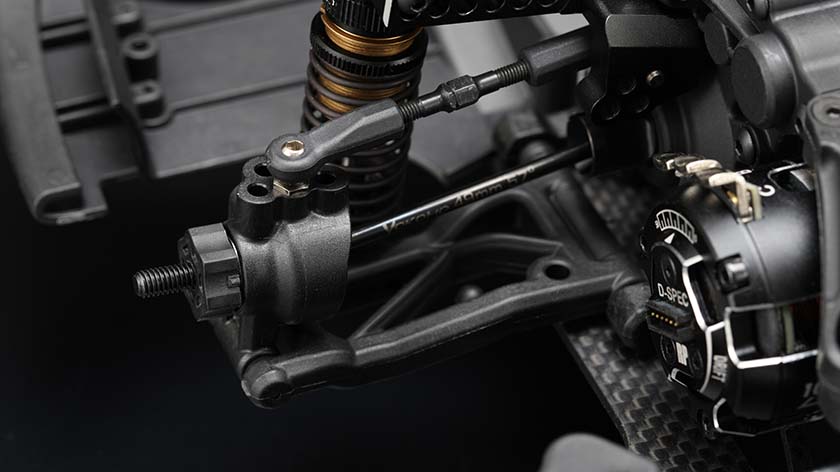 The rear suspension is equipped with an LS rear suspension arm that makes it easy to secure a suspension stroke. Even when the road grip is low, you can increase the roll of the car body by making use of the down stroke, and it is possible to set the ground feeling. 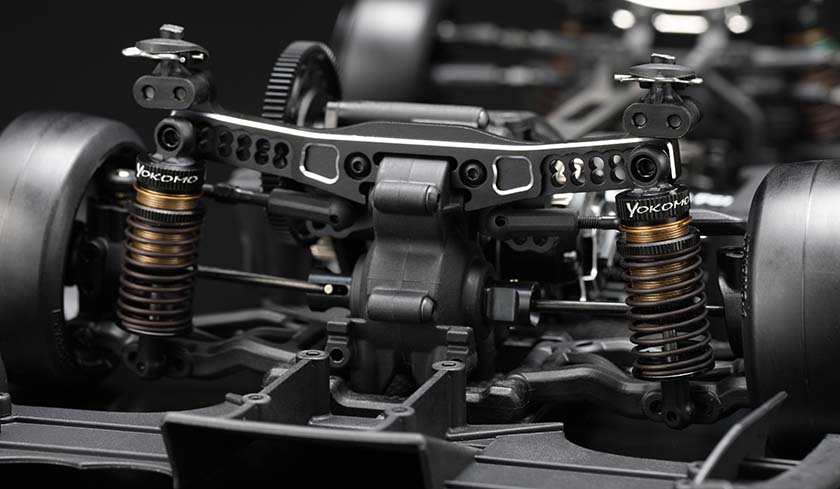 Super low friction shock which applied Kashima coat treatment to aluminum shock cylinder and reduced the frictional resistance with piston to the limit. For on-road use, we adopted a class maximum capacity 11.2 mm big bore cylinder. In the case of resin tires used in drift driving, minor vibration received from the road surface is a major factor of lowering tire grip, but it also absorbs vibrations with a super low friction shock with increased shock capacity, maximizing grip I will earn. Since it is a height adjustment type, you can change the height of the car simply by rotating the spring tensioner, and it also supports springs of various lengths. Of course, by adjusting the damping force finely by changing shock oil or piston, the optimum setting can be obtained according to various road surface and driving conditions.

The largest capacity in on-road car category, 11.2 mm big bore cylinder has adopted and enable to absorb even small vibration due to run with a resin tire in a drift run from the road surface, then possible to get a maximum grip.

Height adjust system possible to change the car height. Rotund the spring tensioner and suitable for various kinds of shock oil and the piston. to get a damping force with finely adjusted. 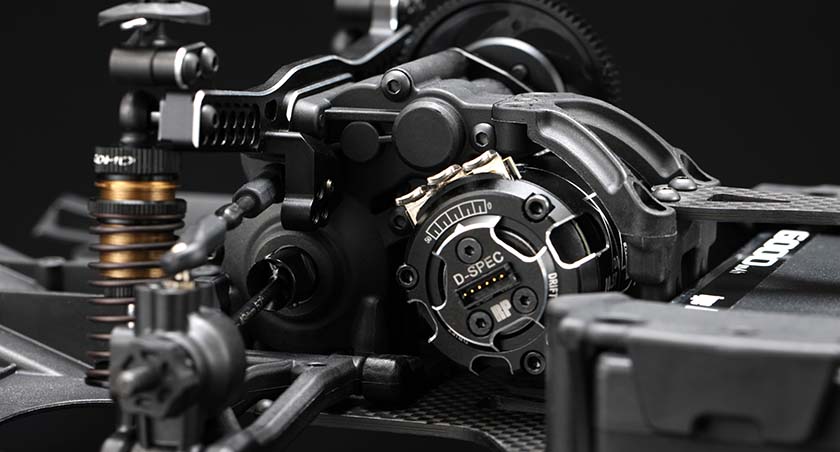 As a drift car, a 4-gear transmission of innovative design. By setting the motor horizontally, it prevents the left-right balance from collapsing due to the counter torque of the motor, and derives the neutral steering characteristic. On the other hand, since the rear traction increases with the throttle ON, it is possible to derive a sense of stability and acceleration at the time of exiting the corner. The enclosed type gearbox is also attractive for its high dust resistance.

In addition, the gear differential of the rear transmission adopted a lightweight resin bevel gear to reduce the weight and increase the throttle response.

Meanwhile, the rear traction will be increased increased the motorcycle, by installing the motor in horizontal position and lead the neutral steering characteristics. throttle, so possible to escape when cornering stability and acceleration forces to withdraw. High dust-proof sealed gearbox is also attractive.

In addition, rear transmission gear is a lightweight type by using a plastic bevel gear and aluminum axle. Contributes to the improved throttle response and performance. 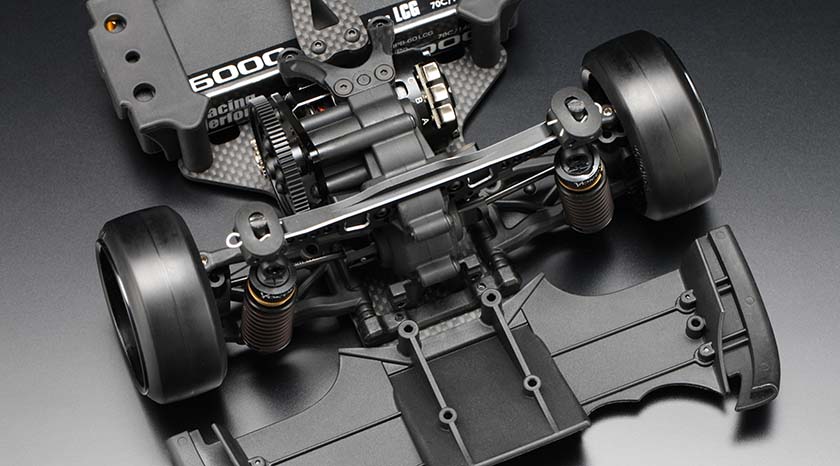 In order to make use of the rear traction obtained by the 4 gear transmission, we set the rear toe-in slightly smaller. Push the machine forward without wasting the acceleration force when raising the throttle. Since the rear catch is lessened even when turning, it makes natural turn-in and flip-back possible. 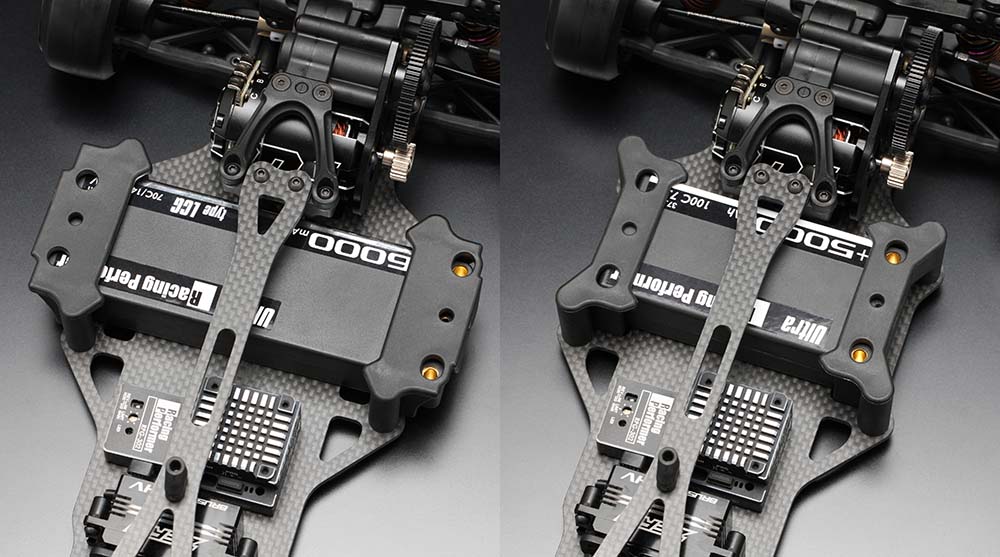 The YD - 2 E series corresponds to all common RC car batteries. As well as Li-po batteries of short size from standard size, 6-cell batteries such as Nikkado and NiMH can also be installed.